A very rare day off mid-week for me for the inaugural event at Whitfield (Northamptonshire), so really did not know what to expect.  I had reviewed the course photos the day before on #twittereventing – and they were causing some degree of concern for the competitors on Tuesday – especially the picnic table (complete with gingham table cloth), the ditch/brush, and the step down to a wide skinny brush……  I was remaining positive, even though there had been such a “dogs dinner” (according to the course builder Mark Watler) made of the ditch/brush on Tuesday that they had decided to put in an alternative for the Wednesday.

Ibby and I travelled together in the big lorry again as we both had early times.  Finn and George were in the same section 1st and 3rd to go, so it was an early start – we left the yard at 5am.  We walked the course and I remembered all the comments from the riders on #twittereventing as I was walking round.  It’s also great course walking with Ibby as she helps settle the nerves and offers positive advice on lines and style etc.  It was quite hilly – but the ground had been aerovated and watered – so was not nearly as hard as it could have been.  We finished the course walk at about 07.30 and got ready for dressage.  I was impressed with Finn as she didn’t get stressy leaving the lorry – despite Doris doing his best to distract her!! She didn’t call or hang to George in the working in either.

I was a bit star-struck working in, with the great and the good of eventing turning out!  Piggy French and Izzy Taylor were working in at the same time.  It was really cold and windy, and started raining as the one before me (Roo Fox) went in.  I felt Finn was listening and much more rideable than the last event at Norton Disney.  A couple of mistakes in the test, including a section of hopping about and an unnecessary canter stride, (meaning a mark of 4 for one of the movements) – to gain 36.5 pens.  The judge’s comments were: “Correct walk and trot, just needs to develop the uphill balance in the canter now.  A lovely stamp of horse”.

I was trialling the Albion Revelation dressage saddle – which felt really good – looking back at the video I can see that I’m sitting much more upright.  I just need to get used to it and retrain myself now.  I’m going to see Claire on Saturday so hope she is positive about it!

ady for the SJ and it started absolutely pelting with rain – we stood on the lorry until the worst of it passed and then went down to the SJ warm up.  We were 5th to go with one clear round so far – the rain had made the ground slippery so it was not the easiest going.  I decided that I must ride Finn positively forward – and not get backward thinking at all.  The plan worked and we had a clear round – not without fault – but Finn tried really hard when I got it wrong once or twice.  Very pleased with her attitude, as not long ago she would have just gone through the fences not caring – or maybe she’s now much stronger and more supple so can get out of trouble more easily!?

A quick change for XC and we were second to go.  “Mr Long Buckby Wharf” was the starter, he introduced me to his wife in the control centre next to the start box.  As I was walking around the start box I heard on the PA that the first horse on course had a couple of stops and the rider had fallen at the ditch/brush and was walking home.  Putting this out of my mind we set off!  I rode positively out of the start box and Finn took me into the first few jumps really well – we were getting into our stride…  Fence 6 was the ‘bogey’ picnic table – so I took nothing for granted and sat up and gave her an extra bit of encouragement as she did start to back off – she cleared it well.

Next challenge was the ditch/brush at 7 – I did think about the alternative, but gave myself a talking to – if I’m going to properly step up from 90 to 100 I’m going to have to grow a pair!!  So I rode her into the fence ensuring I was looking over it – not into the ditch.  She did have a look, but I was sitting well enough and riding positively – and she cleared it!! I was super happy and she had a massive pat for being so brave.

The next fence (8 A&B) was the step down to the skinny brush.  Finn took exception to the stone chippings on the step and did a silly dance to the side before getting onto the chippings and then slithered down the step – I had to really push for the distance to the skinny – but we sailed over clear.  The rest of the course went without issue.  Finn took a second look about 10/12 strides out at the HorseZone laptops at 12, which were very white, but I urged her on and she took confidence and flew it – I remembered my lesson with Jonquil Hemming at Berriewood and thought about the long run-up as well as the short run-up.  We went through the finishing flags clear…..  I heard the commentator say that we were the first horse to complete today – and we were inside the time.

I was thrilled with my girl to go double clear for 8th place in our second BE100 this season, and our 3rd BE100 ever – especially with so many pros in the section!!  We were awarded 2 foundation points for the double clear.

POST SCRIPT:  BE results page – the reason I was star-struck! 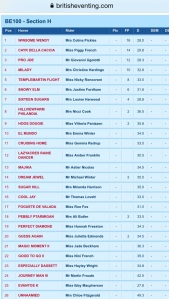