Very pleased with the brown and white one today. We did the ‘Eventers Challenge’ at Aston-le-Walls. Last to go – in the dark!  You can see how dark it is by the photographs! 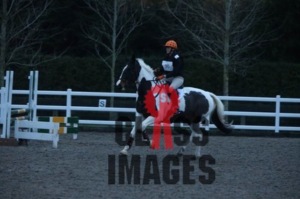 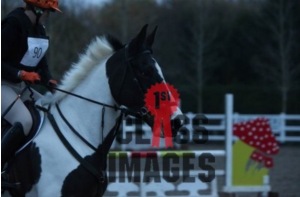 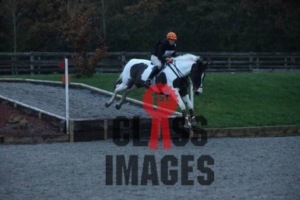 Chris and the dogs came to help and we got there in plenty of time to see a few rounds before I had to go and tack up and get myself ready.

We warmed up and then realised that they were running very late; it was a big field with some pros in the class.  We had to walk around for a good 45 minutes before our turn – I went to jump another practice fence in the warm up area but it was too dark to ride it safely, so we just had a canter and went in to jump our round.

Finn jumped her socks off for a fab double clear and we hit the optimum time on the nose!!!   The course rode well, very inviting fences, lots of twists and turns and a couple of good gallops!  Fence 4 in the SJ was a bit of a bogey fence and the last ‘joker’ fence was quite influential: an upright show jump at the end of the XC.  The whole thing was timed… Start of the SJ to going through finish flags after XC.

I really enjoyed it.  I took a  good couple of pulls before the last ‘joker’ – she has a tendency to get a bit flat so was careful to get her back on her hocks – then was so thrilled to get a double clear I ambled up to the Finish flags; it was a FLUKE that I hit the time exactly!

After sorting Finn out and putting her back on the trailer, we went to the office to see if we were placed, I was congratulating the commentator on the fact he could see the last 5 horses. He said: “Yes, it was pretty dark – but it couldn’t have been all that bad as the last horse won” YIPPEE!!

« Norton Disney – BE100 One Day Event
The Pytchley Hunt – Winwick »